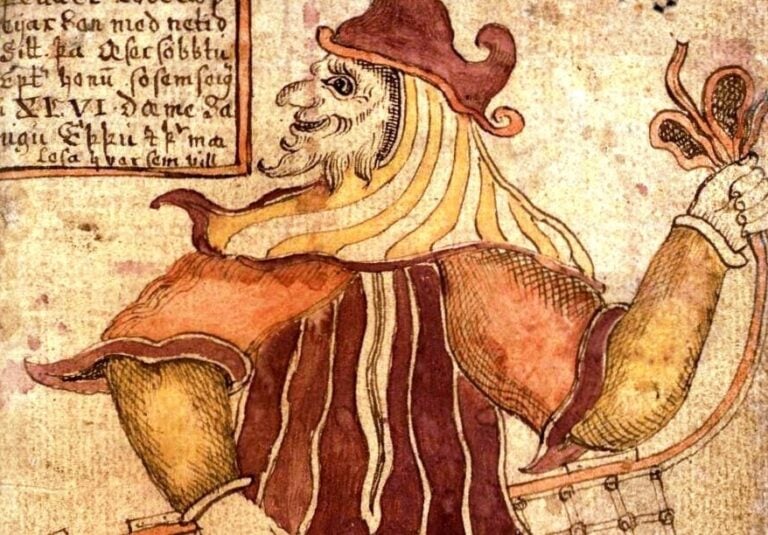 The story of Gylfaginning begins with King Gylfi of Sweden travelling to Ásgarðr (Asgard) disguised as an old man named “Gangleri” to ask the Æsir questions about the universe.

He meets Óðinn (Odin), who is also disguised and presents himself as as three kings named “Hárr” (High), “Jafnhárr” (Just-as-High) and “Þriði” (Third). Gylfi asks permission to ask his questions and Odin replies:

“Stand forward while you inquire;

The one who recounts shall sit.”

While we won’t insist that you stand while reading this blog post, we will hopefully answer any questions that you may have about Norse mythology.

Creation: “Early of ages, when nothing was…”

Since these were the first two beings in existence, life must have been a little boring for them. Ymir would pass the time by drinking Audhumla’s milk and Audhumla would lick a salt block, which eventually took the form of Búri, the first of the Æsir.

Búri had a son named Bor, who in turn had three sons: Odin, Vili and Vé. These three brothers then killed Ymir and used his body to create the universe.

The nine worlds of Norse mythology

The Norse universe consists of nine worlds. These worlds are only referenced a few times throughout the myths and are not specified, but are thought to be (in no particular order) Asgard, Vanaheimr (Vanaheim), Jötunheimr (Jotunheim), Niflheim, Muspelheim, Álfheimr (Alfheim), Svartálfaheimr (Svartalfheim), Niðavellir (Nidavellir), and Miðgarðr (Midgard) – which is our world.

These worlds are connected by a great ash tree named Yggdrasil, which runs through the centre of the universe. An eagle lives at the top of Yggdrasil, while the dragon Niðhöggr (Nidhogg) lives at the bottom and chews on its roots. The squirrel Ratatosk runs up and down Yggdrasil’s trunk, carrying messages between these two creatures – and they’re not particularly nice messages either.